The Toprace TRQ511 Quad Copter Drone is a four channel drone complete with a 720p camera for video recording and photo snapping. It’s of the large variety but comes in at a very low price. It would definitely be a great starter drone for anyone who’s interested but not sure about them.

Is this a well-made quad copter drone ?

For the price, it’s being sold at, yes this is pretty well made. It is shaped like an X which means each propeller sits in a corner, which is quite usual for all sizes of quad copter drone. Each of the propellers is made from a strong bendable plastic that is able to withstand crashes according to the claims of the seller. I can certainly say these claims are true as I haven’t yet had any broken propellers despite having quite a few crash landings. There are four spares included, as you will need to replace the propellers after a bit as they do suffer from wear tear. Unlike other drones I have the propellers on this one and secured in place with screws, which means they can fall off mid-flight or if you have a slight bump.

It’s also quite lightweight, which does mean that flying in high winds is not a good idea at all, as the drone is likely to be blown away quite fast. As I mentioned at the beginning of this review, the drone is also quite big, so finding it shouldn’t be too hard.

As is the case with every other quad copter drone the battery life between charges isn’t anything to write home about. A full charge takes 90 minutes, but the drone can last only about 9 minutes from a full charge, so unfortunately you may have to buy a few extra batteries if you really want to have a good day out on a field with this.

Also, present on the underside of the drone is a set of legs that allow it to sit evenly on the ground and also make it a lot easier to throw the drone so it can start flying in mid-air, this is actually quite a fun way to start the drone flying, although it does require quite a bit of skill.

The included controller is definitely an eye opener too. It’s made from plastic so does feel a bit cheap but in terms of features it’s fantastic. It has a small display at the bottom which gives you information on your current stick positions and speed and also shows you the level at which your trim is set. Talking of trim this is adjusted for each stick using the trim switch below each of the sticks. You will likely find that the trim will have to be adjusted as soon as you get the drone as it doesn’t fly quite well out of the box until this is done, but I’ll go more into that later.

It’s fun, but tricky to learn, especially if you are new to drone flying. It’s something that takes time to master, but once you get the hang of it, it’s great fun. I have flown a few drones but still aren’t 100% confident, so i took this down to a large open grass field five minutes down the road from me to give it a test flight. I did test my other drones in my house and rear garden, but given the size of this one, it’s a much better idea to have a nice large open space. Anyway, I took it down there after charging the battery and gave it my best shot. I adjusted the trim, which was quite easy, thanks to the built-in display on the controller and launched the drone into the air by throwing it. At first, I was a bit nervous and crashed quite a bit, but as soon as I got adjusted to the controller and it’s layout, I was able to fly a lot better, although I did still crash a bit.

The controller has a few other options such as a mode that enables the drone to return to the controller’s location should you find yourself in a bit of a rough patch. I used this feature a few times and each time it worked with no issues at all.

Given the affordability of this quad copter drone, I really wasn’t expecting much from the camera and to be honest that’s what II got, not much at all. The quality isn’t that good for both videos and photos, but it’s still there, it’s still useable and if you just want to record from the sky for no reason, it works, provides a good image and even comes included with a 2GB MicroSD card.

The TRQ511 quad copter drone is the perfect drone for any beginner and for this reason I would recommend it as a Christmas present or even for any other occasion for anyone who might be looking to get into flying drones. It’s large, well made and doesn’t cost too much money at all. At the time of this review, it only costs £56.99. 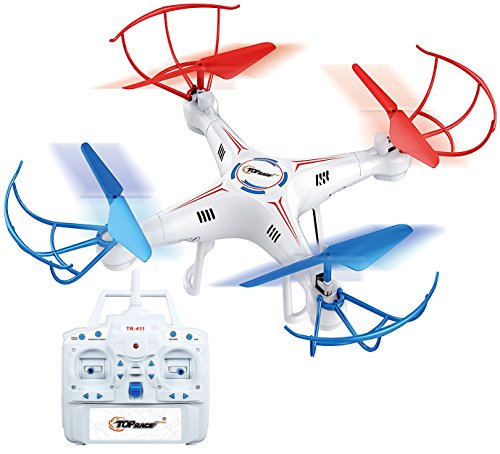