This remote control crane by Top Race could be a great toy for your child or children this coming Christmas day. It offers all of the fun of a typical RC vehicle but with added features such as the crane part which can actually pick things up.

What is the design of this remote control crane like ?

With a scale of 1:45 this is a mid-sized RC vehicle, which means it isn’t too small and neither is it too big, in my opinion, it’s just right as it doesn’t take up too much space, while also not getting lost too easily.

As you would expect from a toy crane, it looks exactly like a toy crane should. It has a yellow construction equipment paint job complete with black and yellow safety stripes in areas. It also has rubber track wheels and can be rotated 720 degrees. It can be used both indoors and outdoors, although it shouldn’t be used outside in wet conditions.

The remote control crane also comes with a toy log to pick up and even a scoop bucket for lifting up small amounts of dirt. While not exactly huge features, these do add an extra element of fun to the toy.

Despite being made with mostly plastic, the crane does feel well made, there is one issue though and that is with the rubber tracks on the wheels. They are quite a loose-fitting and do often fall off, which can be irritating.

This crane uses a rechargeable battery pack. I haven’t yet used this battery to completely drained as the toy has now been put away from Christmas, however after about 25 minutes of use it did seem to still be going strong.

The included controller is quite basic in terms of looks, but in terms of functionality, it has all the buttons required to get the remote control crane to turn, move in different directions and lift things up. This is powered by two AA batteries, which don’t come included.

Despite only having it for about 25 minutes before having to surrender it to the partner so she can wrap it up for my son, I actually did enjoy the time I had with it. It was extremely easy to use and very responsive to each of the commands given to it by the transmitter. I had tons of fun picking different objects up and driving around with them on my laminate flooring.

I was irritated by the lights, though, which as I mentioned earlier don’t feel right on a toy remote control crane. I have to go as far as saying they have irritated me enough to mention them twice. I do, however, like the sounds the crane makes.

That said though I need remember this is a child’s toy so it isn’t really about me. I do feel though that when my son sees this on Christmas day he will be full of joy, although I can’t say how long he’ll play wit it as he will be distracted by other presents too.

This remote control crane will make an excellent gift this Christmas in my opinion. It does have a few small flaws and isn’t by any means 100% perfect but for the price (£29.99 at the time of this review) you really can’t go wrong. 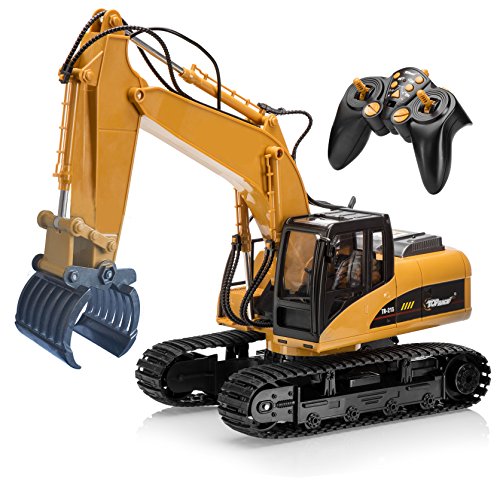