Welcome to my Teclast X89 Kindow Android and Windows 10 Tablet review. This is a dual boot Android 4.4/ Windows 10 tablet. This means you have the choice of booting it into Windows 10 or Android at startup. You can also switch between the two when you’re using one of them.

Given that this is a low-priced tablet (only £65.99 at the time of this review), you would be silly to expect it to come with top end specifications, however, the specification list for this tablet isn’t too bad, sure it stinks of mid-range and uses components from a few years ago but it’s decent enough for this price.

Running the show under the hood is an Intel Bay Trail Z3735, a quad-core CPU made specifically for mobile devices. This is paired with an Intel 7th generation GPU for HD graphics. Memory comes in the form of 2GB of DDR3 SDRAM. This is enough to run most applications and games on the Android side of things with ease, although I have come across some that the tablet struggles with.

On the Windows side of things, performance is pretty good, considering this is running the same version of Windows 10 you would find on a desktop PC or a laptop. This means that not only can you download applications from the Windows store application, you can also download things the traditional way. For example, to download a desktop version of Chrome, I simply fire up the edge browser, go to Google and search for Chrome. Once I have found it I click download and click my way through the on-screen prompts to begin the downloading and installing of the browser. The whole process is 100% the same as on a desktop PC.

However, do remember that on the Windows side of things these are technically only mobile specifications, so full on gaming on games from Steam is not a good idea. Just because you can install it, doesn’t mean you should.

With a 1080p display, this tablet offers full HD viewing,which is fantastic given the price. The screen may not be the best but it is still quite good. The text is clear and images look great, with color representation being about 50/50 on both Android and Windows.

The tablet comes with a respectable 32 GB of onboard storage, however, this does feel a bit misleading as most of that storage is of course taken up by two operating systems. This means the storage is split into separate partitions. These partitions can only be accessed from their respected operating system. This gives you about 16 GB storage on Windows and a rather modest 7 GB on the Android side of things. Luckily there’s a MicroSD slot that supports cards up to 128 GB in size. There is another downside though and this relates to the Android OS. There’s no way to transfer applications to the MicroSD card, which means the 7 GB of space you have on the tablet itself will most likely be taken up in no time, particularly if you download a lot of applications.

The battery is probably by far the worst thing about this tablet. Even though this tablet comes with a beastly 5,000 mAh battery, it’s lucky to see 5 hours of continuous use. This applies to both Android and Windows 10 although Windows 10 does seem to drain it a lot faster than Android does. If you want this tablet to do work on the go, you may want to think of investing in a power bank.

The tablet also has two cameras, a front facing camera with 0.3 MP’s and a rear one with 2.0 MP’s. As you can probably imagine the produced photos and videos aren’t really that good, but then again tablet cameras aren’t renown for being good, even cameras on the more expensive well-known brands and models aren’t too good.

The tablet also does often get warm to the touch, particularly when running Windows 10, where if it was just a centigrade warmer it would probably burn you. Luckily it doesn’t get that hot.

Every time the tablet is started up it presents the user with a choice of booting into Windows 10 or Android. You can also boot from Android to Windows using an application already installed on this operating system. The same can be done from Windows 10 to Android using a program that is pinned to the taskbar.

The tablet has Android 4.4 installed with a near stock user interface instead of a heavily customized one. The only real customization here is a few pre-installed Chinese applications, which can actually be removed by the user, this means you can get a bit of that storage space back. The navigation bar at the bottom of the display has all the usual on-screen soft keys as well as a volume adjustment buttons, a camera shortcut button and a submenu button. Pulling down on the left-hand side of the top black bar pulls down the notification area while pulling down on the right-hand side of the same bar pulls down the quick settings menu.

When first used by the end-user, the tablet has two application screens. These will increase as you fill up another application screen so for example, once the second screen is full, a third screen will be created the next time an application is installed. Swiping left from the current last application screen opens the widget menu, where you will find all of your widgets ready to be added to the home screen.

Android 4.4 is a good few years old now so it does feel slightly outdated, particularly on this tablet. However, I don’t think the tablet will ever see an update beyond 4.4. A long look around the usual area in the setting menu for updates doesn’t reveal an update checker. The only one I have found comes in the style of a pre-installed application called ‘TeclastOTA”. Opening this application gives you a choice between updating online or updating from a local file. Clicking the online option just gives me an error message. I haven’t tried the other option yet as I don’t know where to start.

When it comes to the Windows 10 user interface this is basically the same as a desktop. What you see on the screen is the same. You have the taskbar along the bottom, which has programs pinned to it, a Cortana search box and quick menus for things like volume and networks.

The desktop is the same with the ability to add shortcuts and set a background of your choice. Programs open with the Windows box around them with the minimize, collapse and close icons all located in the top right-hand side corner.

There is a tablet mode you can access from the Action center menu that makes the O.S more touch friendly. Picture Windows 8 but less awful to look at. While I like that this option is here, I personally prefer it on the normal desktop mode. Combine the desktop mode with a mouse and keyboard and you have what is essential a 7.5 inch PC in your bag.

Updates are handled using the windows update section of the settings, this means whenever a new security patch is released or a major upgrade to the OS is released (such as the recent upgrade to the Windows 10 OS) the tablet is able to directly download it as your PC or laptop would. Given that major upgrades (such as Windows 8.1 to Windows 10) don’t require a huge jump in specifications, we may see this tablet upgraded to another major version of Windows in the future.

The first thing I thought when I saw the front of this tablet is that it looks like an iPad mini minus the button and shiny metal edging. The camera is located in pretty much the same place and the screen is the is very much just as wide. That said it isn’t a bad-looking tablet and the wide-screen is so much better than what I’m used to.

Around the back is the 2.0 MP rear camera at the top and a tiny little speaker at the very bottom. There are also several printed words and icons running around the back cover. These are just there to say what button or port does what. There’s also the Telecast branding, the iconic Intel Inside badge and a few other things relating to the FCC. The rear cover is made of plastic but isn’t user removable, which means neither is the battery.

Across the top of the tablet are a small microphone, a mini HDMI port, a MicroUSB port and an earphone jack. Down the left-hand side of the tablet is an open memory card slot. I personally think this should under a cover or a pull out try to avoid accidentally catching it with your fingers when using the tablet. The bottom of the tablet is bare of any features while the right-hand side is home to the volume rocker and power button. These buttons feel really sturdy and  even provide a sort of feedback to tell you they have been pressed.

The overall build quality is actually really good for such a cheap tablet. There’s no creaking, the buttons aren’t loose and the screen even comes with a pre-installed screen protector.

I must admit I am a fan of this tablet. It’s fast on both operating systems, although it has struggled with a few Android games, that said it performs exceptionally well and even more so on Windows 10. It has a few issues such as the rubbish battery life, the overheating, the old Android version and the exposed memory card slot, but when you put these in a group that versus the pros of the tablet, you will find the cons are greatly outnumbered. Would I recommend this as a cheap tablet? Yes, I would. The experience is brilliant from both operating systems.

I received this product for a discounted price in return for my honest and unbiased review. This has had no effect on my overall opinion of the product. 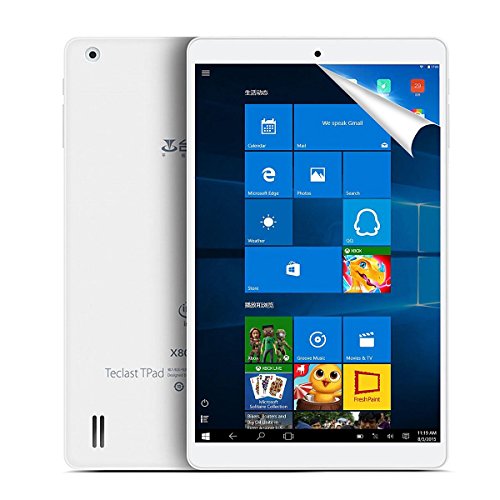