With Christmas just around the corner, there’s never been a better time to get your child or children something awesome to play with and that’s where this toy dump truck comes in. Yes, it’s not from a brand you are likely to have heard of, but still, it’s a neat little toy that might just make your son or daughter smile with glee on Christmas day.

Is this toy dump truck well made ?

As a parent, I can safely say this toy is well made and to a pretty decent standard too. The plastic used is strong enough to resist bumps into things like walls or table legs. In terms of design, this looks like any ordinary road dump truck/snow plow, well as close to a real vehicle as a toy possibly could.

At the front of it is a detachable snow plow that can be removed and re-added at any tine. The cab also opens outwards to reveal an engine area. The opening mechanism is a bit stiff and requires a bit of force and unfortunately this issue doesn’t seem to vanish over time. Behind the cab area is the large container that would be used to store the grit. This has two large blue lids that each sit on a hinge that allows the lids to open upwards. These clip shut, which prevents them from loosely opening. Inside the container is a hole that allows fine grains such as sand to run through to the spreader on the back. Next to the spreader is a neat set of ladders. This really does show that the manufacturer has really thought of everything.

The real beautiful thing about this toy dump truck is that it has a pull back motor, that is actually quite the little speed demon. Just pull it back, let go and watch as it flies across the floor at quite some speed.

Yes, would be my short answer. He has spent ages playing with it and the other toy dump truck he owns from the same brand, so it’s not only this Sinaco toy he enjoys. We have sat together numerous times now and played with this, pretending to grit roads covered by snow.

He loves the pull back action and watching as the truck speeds across the room. He actually decided to race the two trucks together and it turned out to be a lot of fun, for both of us. As well as that we have played using a bit of sand to act as grit being spread from the spreader, which while messy was actually quite a lot of fun and impressed my little lad.

This toy dump truck by Sinaco is a well-made toy, that has so far provided many hours of fun for my three going on four-year-old son. The only issue I have experienced with this is just how stiff the cab is to pull open. 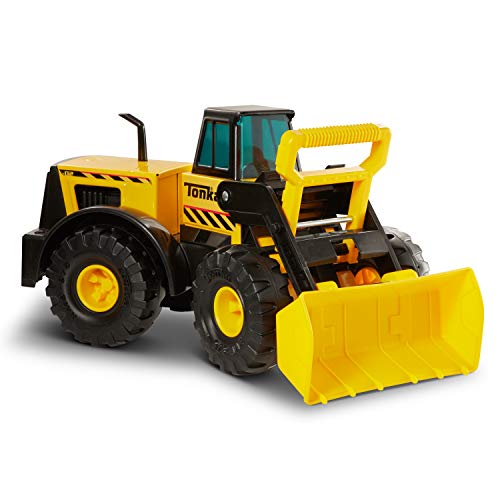