The Waterproof Power Bank 6000 by Sandberg is an IP67 rated PowerBank. An IP67 rating means it has been tested and passed the following tests.

Listed below are bestselling Waterproof Power Bank which satisfy both affordability and quality.

So in terms of protection this PowerBank is built almost like a tank, although I haven’t tried to drop it to see how it handles falls, but given its rugged looks , my guess is it should do quite well against the dreaded drop.

The first thing to really take me by surprise about this product is its size, in the stock product photo it looks like it may be a big device, but it’s actually quite small, which really helps to give it that portable feeling. Sandberg has really gone out there to make this pocket-friendly. You get a neat little carry pouch that just snuggly fits the PowerBank. Also included is a wrist strap and a snap hook.

The device itself is coloured in black and green. The top and bottom plates are black, while the edging running around the whole device is green.  Located on each of the top corners of the edging is a rubber flap, the right side flap covers the USB out port, while the left-hand flap covers the MicroUSB port.  When closed these flaps protect the ports from any dust or water, however, when opened you should exercise a bit of care and not let water or dust get into these ports.

Any device designed to be used outside just wouldn’t be complete without some sort of torch-light and the guys at Sandberg know this, so they have actually added a torch to this PowerBank. This is activated using a touch sensitive button on the top plate. Also, present on this top plate and next to the touch sensitive button is a set of four LED lights that are used to show you a rough percentage of just how much battery life is remaining. Here’s a breakdown of what 1 to 4 lights means:

This is a handy way to keep track of just how much juice you have left from the large 6000mAh battery that this PowerBank is home to.

The only thing that does disappoint me, but only a tiny bit is the fact this only has one USB output for charging mobile devices, with a large 6000mAh battery it would be perfect for charging two devices at once if required.

According to Sandberg, charging this PowerBank up by an AC adapter takes roughly 6 to 7 hours, in my charging test I found it to take around 6 hr 30 minutes which for a battery this size isn’t too bad at all. It may be a bit slower if charging directly from USB port on a PC.

Given that my phone has a 2,840mAh battery I actually manage to get 2 full charges from this device which is pretty decent and if you have a device with a small battery such as say an iPhone, you could even get up to four full charges from this device, so with a full battery in this you are looking at a fair few charges dependent on your phone or tablet. When it comes to charging time for the connected device it also doesn’t seem to be too bad, it takes under just two hours to charge my phone from 0 to 100%, which is about the normal statistic I get when using PowerBanks.

This is a solid well-built PowerBank that has not only been designed with resistance in mind but also pure portability. Its size is a true gem as it makes carrying this device in a bag or pocket so much easier and less space consuming. Its large capacity battery means it’s good for a few charges before needing to be charged itself. There’s no doubt that this amazing device will charge your phone throughout any storm. The only thing that could have made this better is an extra USB outlet for charging two devices at once.

Disclaimer: I received this product for free in return for my honest and unbiased review. This has had no effect on my overall opinion of the product.

Check it out here: 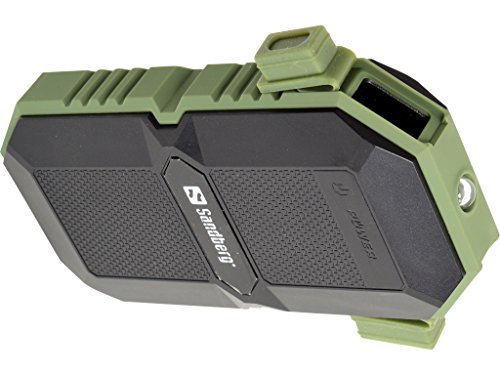 Having earned 9.2 out of 10, the PowerBank 6000 has earned a Gold Reward. Scroll down to check out the full score breakdown.