Welcome to my Sandberg PowerBack 3000 review. This is a solar power bank that is like no other I have used before. This is because, instead of being connected to a phone using a cable and left of a side to charge, this one actually sits on the rear of the rear of the phone and allows you to charge the phone as you use it. This is a concept I love, but it does come with some flaws.

Listed below are bestselling Sandberg PowerBack which satisfy both affordability and quality.

The unit is shaped pretty much like your typical candy bar style phone, which lets face it is the style phones use nowadays. On the inside, it has a rubber padding which stops the PowerBack from accidentally damaging or scratching the phone. The outside of the PowerBack is home to the solar panel arrangement which consists of a panel made up of 10 squares.

At the top of the device is an extendable arm, which allows you place phones up to 16.5 cm in length. At the bottom is a MicroUSB connector. (If you have an iPhone, fear not as there’s also an iPhone variant here).

Now here comes a flaw. On the official product page, Sandberg does mention that your device should have a centralised MicroUSB port on the bottom, this is fine most phones have this but that doesn’t mean most phones are going to fit properly or even fit at all. Most will and most won’t. I have two phones in my possession that don’t fit on this device as you would desire.

The first phone I’ll mention is the Lumia 532, a small but thick phone. As required the MicroUSB port is central, but the thickness of the phone creates an issue that means the phone can’t sit properly on the PowerBack 3000, the only way it sits on it, is at an angle that could potentially damage the USB port of the phone and the PowerBack itself.

Luckily I have a third phone in my possession, the Samsung Galaxy S7, which thankfully fits on this with no issues at all. So in terms of compatibility it is a bit hit and miss but if you have the right phone you should have no issues at all, it’s just such a shame it’s such a hit miss as there are so many different phones available, this product is just not guaranteed to work with all of them.

Another thing to note is that you will have to remove your case if you use one as the thickness will prevent the phone and PowerBack from connecting.

Now I will say this, out of all three phones I tried this did charge each one, but I am focusing on the only one that managed to fit properly, the Galaxy S7 for this part of my review.

The PowerBack 3000 can be charged either using the provided USB cable or using the power of solar. If you charge the battery and connect the phone to the PowerBack the phone will simply charge from the built-in 3000mAh battery, but if the PowerBack is fully drained and it’s sunny outside you can still use it to charge your phone but do be aware fully charging a phone such as the S7 takes a good while, it took me almost 10 hours using direct Solar Power.  It also takes roughly the same amount of time to charge the PowerBack using this method. If you want it to be charged quicker you would be best plugging it into a USB port, which gave me a charge time of only a couple of hours.

Charging the phone while the PowerBack 3000 has a full battery and isn’t relying on the sun does give a decent charging time for the S7 from 0% battery to almost full battery. It took just under two hours which isn’t bad at all. Now I say ‘almost full’ because the S7 has a 3000mAh battery, which is also the same capacity as the PowerBack. All power banks don’t spend all of their capacity on charging devices, they have to use some of it for conversion and to power themselves, so you don’t get the full amount listed but you do get a near full amount. Luckily since this is a solar charger, it can just carry on charging even when it fully runs out of juice, so long as you are in a sunny area.

Overall: The idea behind the product is amazing, it’s something that has been needed for a while. The power to charge your phone using the sun without having to have a large solar panel kit connected to your phone as it lies on a table makes this product a simply brilliant idea. Of course, though, there’s the big issue which is the design. While the Powerback 3000 works quite well on some phones (The S7 in my case) it doesn’t quite work with others (in my case the Microsoft Lumia 532 and the Htc One M9). This leads to an unfortunate uncertainty of weather or not this will work with your device when you go to make the purchase.

Now, in all honesty, I love this product and I fully understand that Sandberg doesn’t have access to every phone on the planet. They have constructed this to work with ‘most’ phones and I believe it will. Unfortunately, it’s just too hard to say what phones are counted as ‘most’ phones.

Would I recommend it though ? The answer is yes if you have a phone such as the S7 which I can confirm works really well here. As I mentioned at the beginning there’s also an iPhone version available with a lightning connector.

Check it out here: 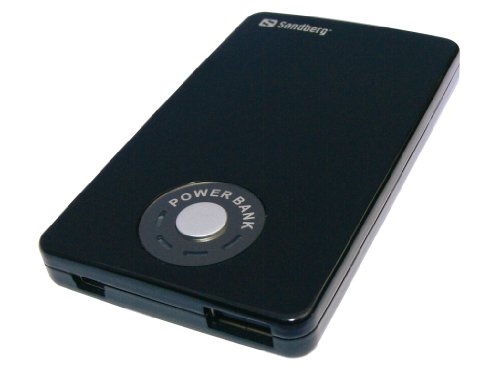 Having earned 7.5 out of 10, the PowerBank 6000 has earned a Gold Reward. Scroll down to check out the full score breakdown.