Welcome to my ONEVER Negative Ionic Shower Head review. This isn’t any normal shower head, this one consists of negative ions. Negative ions are atoms that have been charged with one or more negatively charged electrons. Negative ions have many benefits to our health as they clear the air of things such as bacteria, viruses, smoke and loads of other airborne hazards. This also means they can effectively remove the bad particles from your skin that you would collect on a normal day-to-day basis.

The first thing you’ll notice about this shower head is that it’s see-through and contains three different sections with different colored balls inside. The balls and what they do are as follows:

Since this shower head is full of loads of balls it is a bit heavier than the traditional shower head, although to be honest, I do prefer it like this as it gives this shower head a high-quality feeling. There’s a chrome trim that divides the handle from the top section. This trim is actually plastic, so does have a slight tacky look.

The panel area is made from stainless steel and has several tiny holes, where the water shoots from as you would expect. The holes aren’t very big so they each let out a fine stream of water.

The shower head fits my old shower hose with ease and there was no need for any adapters or adjustments at all, it simply just went on with no hassle. 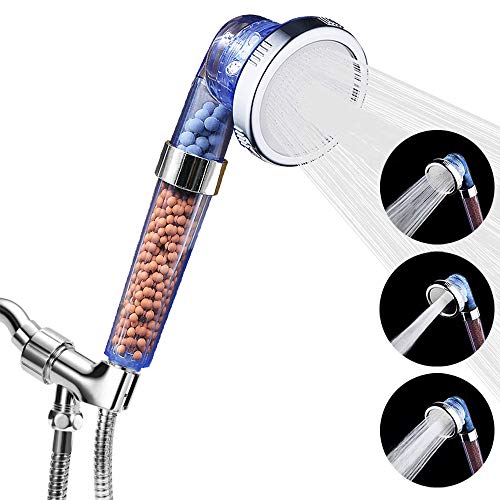 I have had this shower head up for about 3 weeks now and must say it does perform really well. The water output is brilliant as it provides enough water flow for a different wash, but not so much that you feel the water stabbing at you as it hits your skin.

I also must admit that despite being skeptical at first, the negative ions do seem to be working. The water seems and looks fresher, while I feel much better in terms of health, for example, my skin feels clearer and my acne has been less aggressive.

There’s one issue though and that’s lifespan, unfortunately, these types of shower head do not have a long lifespan in which they remain effective. On an Amazon Question, somebody asked about this topic and the seller said you should replace the shower head every 6 to 12 months. While the heads are very cheap to buy, it’s quite annoying that they only last between 6 to 12 months before needing to be replaced. The balls inside can’t be replaced on their own so it means a new head completely.

This is an amazing shower head. The build quality is great and the negative ions really do work. The only downside is that it doesn’t have a very ling lifespan, which means you have to replace it between 6 and 12 months or you’ll lose the positive effects.