The Kitsound District Bluetooth headphones are the latest entry into Kitsound’s wide range of audio products. They feature a battery that lasts up to 20 hours, Active noise cancellation technology, a built-in microphone and a foldable design. They also have another feature, one that I haven’t yet come across on wireless headphones, this is wireless Qi charging, which I’ll go more into later, for those who don’t know what that is.

True to their name, the District headphones have an urban styling to them, making them the perfect headphones to wear while walking through busy streets. The headphones are black in color and are constructed mostly from plastic, but rather than being a cheap plastic, it feels rather sturdy.

Despite their urban styling, it’s nice to see that Kitsound hasn’t sacrificed comfort in the name of ”cool”. There’s plenty of padding around the earcups and the headband is thick and soft. This has meant I am able to comfortably wear the headphones, even for prolonged periods of time.

On the backside of the right-earcup is the control area, which is home to three buttons, an ANC switch, a microUSB port, a 3.5mm audio jack and an LED status light. The three buttons are the volume/track buttons and a power button, which all work quite well, although I do find their positioning to be somewhat awkward as it can be a guessing game as to what you’re pressing when you can’t really see the buttons. To combat this, Kitsound has etched symbols into the buttons, but unless you dig in with your nails, they’re not that easy to make out.

Portability isn’t much of an issue with the Kitsound District Bluetooth headphones, as they can be folded in. The hinge mechanisms are located on the edges of the headband where the earcups are connected. When folded the headphones always fit nicely in my backpack, without taking up too much room.

Powering the District headphones is a rechargeable LiPo battery, which Kitsound claims can last up to 20 hours when playing music and up to 26 hours when being used for talking. During my period of mixed use, which includes listening to music and some talking over phone calls, I’ve managed to get around 20 hours of use before having to recharge again, which is very good, when most Bluetooth headphones only offer up to 15 hours at the most.

As I mentioned at the beginning of the review, the Kitsound District Bluetooth headphones feature wireless Qi charging, which is something I haven’t come across before with wireless headphones. You may have a smartphone that features this technology and if you do, well it’s the same principle, you have a wireless charging plate that plugs into a USB port any time you want to charge your headphones you place them on the plate. As easy as 1-2-3 basically.

Rather than leave you to go and source your own charging plate, Kitsound has included one in the headphone package, meaning you’re instantly able to use the feature as soon as you get them.

There are two ways you can connect these earphones to your device, one way is through Bluetooth, the other is using a 3.5mm audio cable. The inclusion of a 3.5mm audio jack is very welcome, as there are still plenty of MP3 player users out there and not everyone with a mobile phone wants to use Bluetooth for listening to music.

If you do want to use Bluetooth, then I am happy to say it’s very much hassle free with these headphones. The initial pairing takes no more than 30 seconds and once connected and in use, the connection is strong and reliable.

When it comes to audio, the Kitsound District Bluetooth headphones really do deliver. They aren’t something a top end audiophile might be 100% pleased with, but if you want something that does a great job of playing your Spotify library or Amazon Music while on the go, these are a great choice.

The audio is clear, even at higher levels where distortion isn’t noticeable. Bass is quite rich, which could be an issue for some songs, although the ones that make use of it are well-played through these headphones.

ANC (Active Noise Cancellation) is present on the District Bluetooth headphones. Without going into too much, ANC basically blocks out external noises such as TV’s, machinery and the nagging of others. It can be turned on and off using a switch which is located on the right earcup. I have found it to work quite well when out and about, particularly when sat on a crowded bus.

The Kitsound District Bluetooth headphones are well made, packed full of features and deliver an overall pleasing sound quality. The use of wireless Qi technology to charge the headphones is a great idea and its one that works really well in this case. 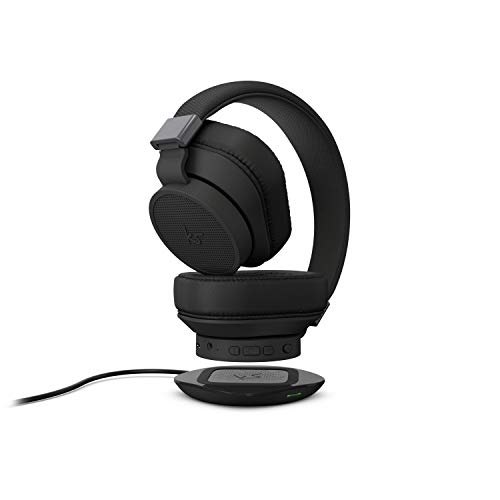