Welcome to my Karlsten Electronic Rodent Control review. This is a box that has been designed to instantly kill rodents and allow you toe easily dispose of the corpse afterwards. I should point out that for the purpose of this review no rodents have been killed, either accidentally or deliberately.  As I haven’t had any rodents in a while I am not fully able to comment on how well it kills a rodent, so I will focus my review on other aspects such as design and ease of use. 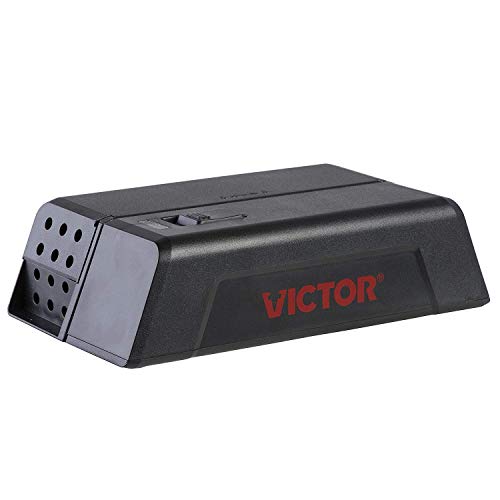 The device itself consists of two main parts. A top lid part and a bottom base part. When put together, these form a one ended tunnel that the rodent enters and instantly receives a killer shock. The bottom half consists os several metal plates which connect with the top half through connection points that line up equally on both parts. The top part houses the electrical components as well as a battery compartment that can be used instead of the supplied plug (perfect for areas without access to a mains socket). If going down the battery route you will require 6 D cell batteries.

The two parts are very easy to put together and just as easy to separate. When it comes to disposing of a dead rodent, you don’t have to always remove the top as you can simply hold the trap at an angle and allow the rodent to slide out.

The unit is quite big so placing it will have to be done properly to keep it out-of-the-way of children or pets as 7000 volts of electricity isn’t a toy and could prove to be fatal. There are warning stickers slapped all over this to warn you. These are best left on so you don’t forget and anyone who hasn’t seen it before doesn’t end up picking it up and seriously hurting themselves.

As I mentioned above this needs to be setup in a way that keeps it out of reach of children or pets. This means it’s best off hidden somewhere that’s inaccessible to people or pets but big enough for a small rodent to get through, for example behind the couch or in the back of a walk-in cupboard.

Using it is simple enough. Before turning it on place some bait inside such as bread crumbs or even dog food, now set it down somewhere safe. Now turn it on and leave it to do its job. If a rodent is caught in the trap a red light will flash to say it has been caught and is currently receiving an electric shock. DO NOT under any circumstances touch the unit when this light is flashing, wait until it starts flashing green before proceeding to go near the unit. The trap comes with an extra LED light on a cable that can be used to alert you visually if the hidden trap has got a rodent.

Once the unit has done its job you can proceed t turn it off and dispose of the remains. This can be done by holding the trap at an angle and allowing the remains to slide out of the tunnel.

This is a simple and very easy to use trap. It should be placed with safety in mind as it could be fatal to humans or pets. It’s easy to set up and provides enough warnings about use.