Today I am reviewing the Jetery HD USB Inspection Camera. This is a handy camera that is really useful for the hard to see areas such as down pipes (yes it’s waterproof), inside the couch, hard to see places in the home and under the hood of a car. 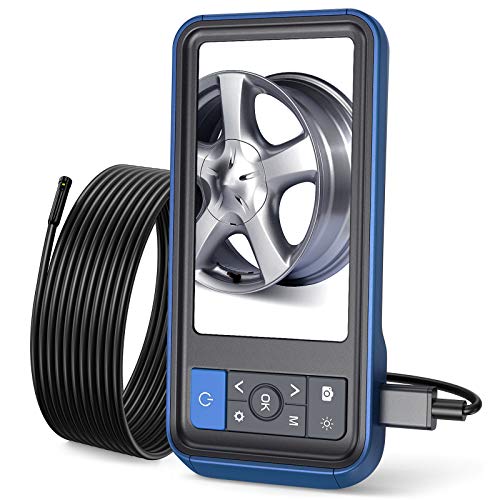 Since this camera is designed to get into tricky places it has a rather slim profile, in fact, the camera lens sits on the tip at the end of a narrow flexible tube that also holds the cables running from the camera right to the PC. The only part that’s thick on this camera is the area where the camera lens cables converts into the USB cable. This area has a dial for turning on and adjusting the brightness of the LEDs around the camera lens and a button that snaps photos and records videos. The large area is also host to an area that the camera tube can be wrapped around when not in use. Also present is a clip that allows you to clip this to your tool belt if you need it for a job. As well as this there’s also a wrist strap present.

The USB cable on this device has a length of 2 metres, this is a great length if using the camera with a laptop or a smartphone but not so good if you are using a fixed PC. In case, you’re wondering how this connects to a smartphone, it connects via USB On-The-Go, now this means it won’t work with an apple device but will work with most Android devices, when I say most I do mean most but not all as not all Android phones have USB On-The-Go. Included with the package is an adapter that connects to your phone’s MicroUSB port and has a normal USB port on the end for you to connect the camera.

Straight out of the box I was able to use this camera with the camera software built into Windows 10, however, there’s also a disc included with software already installed, which you actually don’t need to install onto your PC, you can simply run it from the disc. I found the software to be easy to use as it’s really straight forward. I haven’t used it with my phone however as this aspect isn’t of huge interest to me, I prefer to use it with a laptop.

The image quality from the camera is pretty decent, but it could be better although saying that overall it isn’t too bad, just a bit blurry, but not enough to make any objects unidentifiable. As I mentioned in the design section, this camera has a series of LED’s around the lens, six to be precise, these make it possible for the camera to be sued in the darkest of places with perfect vision, These LED’s are also adjustable from off to brightest.

Not only can this be used to collect images it can also be used to grab items that you otherwise wouldn’t be able to reach. This is because it comes with some small accessory pieces which can be attached to a threaded area around the lens. These accessories are a magnetic piece, a hook piece and lastly a mirrored piece for seeing at better angles.

This is a brilliant camera that is really good for inspection of hard to reach areas, even dark ones. The only drawback is the USB cable isn’t long enough to reach areas from a fixed PC, this isn’t a major issue but a longer cable would have been nice.

DISCLAIMER: I received this product at a discounted price in return for my honest and unbiased review. This has had no effect on my overall opinion of the product.