The Jabra Elite 45e headset review is one of the latest wireless headphones offering from Jabra. It features support for voice assistance software such as Alexa, an IP54 rating for protection against dust and water and a built-in microphone amongst other things. They are currently priced at £89.99 in the U.K.

Listed below are bestselling Jabra Elite 45e Review which satisfy both affordability and quality.

One of the main selling points of the Jabra Elite 45e headset is its design. It’s quite clear just from looking at the headset, the designers and engineers at Jabra have really put a lot of thought into things such as comfort and practicality. The biggest give away to this is the neckband, which each earpiece connects to. This neckband is flexible instead of stiff, which makes fitting the headset quite easy, but at the same time prevents any weight-related issues that could be caused by the remote and microphone areas.

The remote and microphone setup are separate with their own control boxes. These two boxes are located between the neckband and the right-side earpiece. The remote box is home to the power button and the volume/track selection buttons. It’s also home to a microUSB port for charging the built-in battery as well as a small LED status light. The microphone box is positioned slightly closer to the right earpiece, which means it sits parallel with the mouth, which is something I haven’t seen much of with other Bluetooth headsets, so to see it been done properly here is quite welcome. The button for answering calls is located on the microphone box.

For the most part, the buttons on the control box are responsive and work really well. The power button, however, is a bit stiff, particularly when trying to press it with a finger. If pressed with a fingernail it’s much less stiff, I have found.

Jabra’s engineers and designers great work also shines through with the earpieces themselves, which have been designed to insert into the ears at a slight angle. This angle makes inserting them really easy and also ensures they stay inserted, rather than falling out every so often. I also have to say they are really comfortable, even during prolonged periods of use.

Magnetic headsets aren’t anything new, but the way the Jabra Elite 45e headset makes use of magnetic technology is something I haven’t seen with other magnetic headsets. While the basic idea behind magnets in headsets is to keep the earpieces attached neatly together when not in use, Jabra has added more functionality on top of the basics. When you bring the earpieces together not only will they bond, they will also turn off the headset, until you un-bond them. This means you can quickly and easily turn them off or on, when required without having to hold the power button down.

Powering the Jabra Elite 45e headset is a built-in rechargeable battery. This offers up to 8 hours of use from a single charge. Of course, the overall usage from a single charge depends on certain factors such as the volume level. I have been getting around 6 hours using these at their loudest volume, so it’s about average in terms of battery life. A full charge from a fully flat battery takes about 2 hours, which isn’t bad.

The Jabra Elite 45e headset is of course designed with vocal content in mind, which means when it comes to things like audiobooks, podcasts and phone calls the audio is incredible. Everything is clear and crisp. Trust me you won’t find yourself having to rewind or ask questions as everything is just so damn clear for the most part. The built-in microphone does a wonderful job of ensuring your voice is clear and easily heard by whoever you are talking too. Unfortunately, this headset doesn’t offer noise cancellation, so if you do find yourself using the headset for calls during a busy commute, this could present some issues. If noise cancellation is a must for you, then Jabra do offer a slightly beefier headset, called the Elite 65e.

The other thing people use headsets for is, of course, music, which is actually not too bad with this headset. Some audio comes out slightly muffled, particularly songs with a focus on treble and the bass isn’t over the top. That said though a lot of songs come out sounding pretty good and just like with phone calls, the vocals are clear and crisp. Despite this, you can still play around with the audio and make it sound even better by using the Jabra Sound+ application, which allows you to set up your own equalizer and amongst other things can also be used to upgrade the headset’s firmware. I have posted the links for the Android and Apple versions of this application at the bottom of this review if you wish to check them out.

In summary, the Jabra Elite 45e headset is a great headset, especially for people who themselves doing a lot of talking on the phone while on the go. The music quality is overall good but can be made even better using the application. The build quality is great and the magnetic feature has been really well utilized. 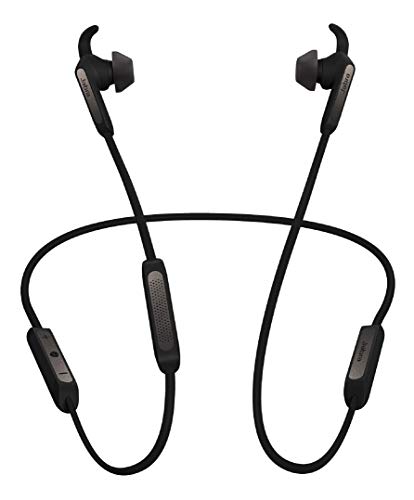