Love them or hate them, selfie sticks such as the Fantaseal wired selfie stick are here to stay with no sign of moving on anytime soon. Admittedly I’m not a huge fan of selfies, but none the less I have decided to review this device anyway.

When it comes to design, it’s often quite hard to find a selfie stick that actually looks somewhat stylish. Usually, it’s just a plain-looking stick with a mount for a phone, but the Fantaseal wired selfie stick is different as it actually looks quite good. It is available in four different colors, which are black, blue,  red and golden. I have the blue version which looks fantastic, although the pictures of the other colors do look good too.

The body of this selfie stick is of the telescopic variety, which means it extends in and out to allow for various levels of height. At its highest, it measures 80cm whilst at its lowest it measures 23cm. It uses a body that is composed of four sections, which twist and lock into position. When locked each section remains sturdy with none accidentally coming lose, even during the roughest of uses.

It features a 3.5mm audio jack cable connector, which is used to connect the built-in remote to your device’s audio jack, which turn allows you to snap photos without having to touch the phone itself.

Something really neat about the design of this selfie stick is that it comes with three different mounting options, which gives the user to ability to mount a GoPro, a mobile phone or a camera that uses the standard 1/4” connection.

The rubber handle at the bottom of the Fantaseal wired selfie stick is a slight letdown in my opinion. It feels too hard, which makes it slightly uncomfortable, particularly during long periods of use. At the bottom of the handle is a hole to mount a tripod stand if you require this.

I have used the Fantaseal wired selfie sticks with a few phones such as a Moto C Plus, Samsung Galaxy S7 and a OnePlus 6. Each of these devices fits nicely within the phone mount, although the exact positioning of the device depends on where its buttons are located, for example, the Moto C Plus doesn’t sit centrally as the power button would end up getting pressed down by the mounts clamping system. The clamp does feature rubber padding on both the top and bottom grips to ensure your device remains free of damage or scratches during use.

Overall the Fantaseal wired selfie stick is a decent stick for anyone who for whatever reason enjoys taking selfies. It’s well made and looks quite stylish as well. It’s easy to set up and a choice of three mounting options makes it a great tool for a budding photographer finding in his or her way. 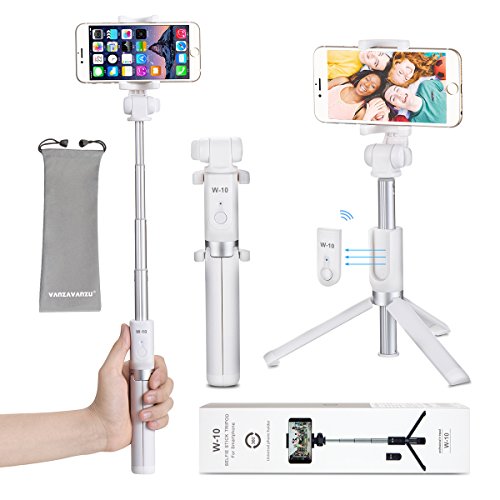