Edifier produces some fantastic multimedia speakers, but did you know they also have a range of headphones? Just like their speakers, they produce a wide range of headphones such as the Edifier H850 headphones, which are a no thrills set of headphones designed with simplicity in mind. There’s no Bluetooth or in-line controls, instead, the main focus of these headphones has been centered around sound and comfort. 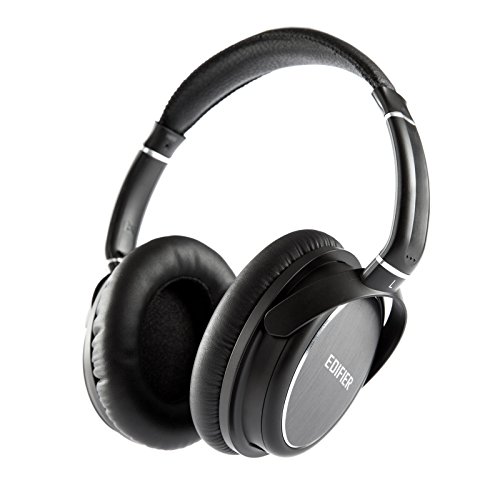 The Edifier H850 headphones feature a typical headphone design with a headband flanked at each side by an earcup. A brushed aluminum plate sits on each earcup complete with the Edifier branding. Both of the earcups feature a foam filled synthetic leather padding which makes them very comfortable to wear. The headband is also padded, but it’s not thick padding, which is a slight disappointment as it means that after prolonged periods of use they do sometimes start to feel uncomfortable. A simple sliding mechanism between the headband and each earcup makes the process of adjusting the headphones rather easy.

In terms of looks, these are rather basic looking with no real standout features. Despite being rather basic they do look rather stylish thanks to the above mentioned brushed aluminum plates sat against a black matt paint finish with silver trimming around certain areas.

One of the key features of the Edifier H850 headphones is the removable audio cable. The supplied cable has a locking mechanism in place, however, this doesn’t prevent the user swapping it for their own cable should they need to. In terms of length, the one you get is actually quite long at 2m. This means there’s plenty of cable particularly if you are sitting at a PC and using these. If using these while and about, like me, you’ll find the excess cable will need to be tucked away somewhere, which is a slight annoyance, but overall it’s a 50/50 situation as you get a PC friendly cable and a not so friendly phone cable in one. As I mentioned though you can swap the cable for your own if you find the length to be too much while out and about. If you wish to use these with something with a large jack, then you’ll be happy to know a 6.3mm jack adaptor is included in the box.

For easier transport, Edifier has equipped these headphones with earcups that turn inwards to make the headphones flatter so they slide in and out your bag much easier, whilst not creating too much bulk. Admittedly I would prefer if these folded over instead as this would make storing them much easier than just flattening them does.

Edifier makes a point of telling you that these headphones have been fine-tuned by Phil Jones personally. If you’re not aware who Phil Jones is, well he’s a man with a passion for audio combined with the knowledge of how to produce speakers that get audiophiles jumping with joy. So Edifier’s partnership with him makes sense and the results have certainly shown themselves with the H850’s.

Before I get started on the audio quality itself, I must say I do find the lack of built-in volume control to be a disappointment. Usually, with headphones, I adjust the volume from an inbuilt volume adjuster before I do it on my phone. Since that’s not possible with the H850’s I am limited to the overall volume I can get from them.

The Edifier H850 headphones do produce some pretty decent audio which is clear and crisp. At their highest volume, they remain distortion free, which creates an overall joyous listening experience. Both the mid’s and highs are set just right to ensure the audio comes out sounding as fresh as the day it was produced.

Bass on these headphones is quite good with a strong output that ensures that the music playing sounds almost as good as it would playing from a large speaker. I found that on bass-centric songs, these headphones performed extremely well. On songs with less bass, they behaved just as good as i had expected them to.

So above all, the Edifier H850 headphones, although lacking in many features, are definitely one of my favorite sets of headphones. What they lack in extras, they more than make up for in sound quality and comfort. A few issues do bug me, but I just can’t get over how well Edifier has managed to produce a pair of simple headphones.