Welcome to my Chuang Feng Toys Flexible Car track set review. Usually, when it comes to toy car tracks, you are given a set of instructions on how to build the track, this set, however, is different as it allows your child and yourself to make the track your own.

The set consists of 118 different brightly track pieces. Instead of being rigid track pieces, each piece can be set straight or even at a curve, this is what enables you and your child to create any type of track you like. Rather cool is the fact that the track also glows in the dark, while not a necessity, it’s still awesome.

Included with the set is a police car that uses an electrical motor to automatically drive along the track. This car is made of thin but durable feeling plastic. It’s powered by two 2 AA batteries (not included). These live in a see through compartment on the bottom of the car. To activate the car you simply press the sirens on top and you do the same again to deactivate it. There are also lights on this car, but what’s really cool about them is they won’t actually require the batteries. When the wheels are moving they create energy which is then transferred to the lights. This means even without any batteries in you can still push the car with your hand and the lights will light up. The rear wheels of the car have silicone grip rings on them which allow the car to grip the track. There are also four spares included. These are really easy to take off and replace.

I’m not really a huge fan of the cardboard police station in this set. I know cardboard has been used to keep the price down, but I would rather pay a few quid more and get something made of plastic that will survive a lot longer than a fold out cardboard police station. The one in the set I have doesn’t even stand straight and already has creases in it.

The rest of the set including the signs and bridge supports do all feel really well made and look it too. The robbers you chase come in the form of two plastic balls and stickers, instead of actually figures, this just makes watching the car chase them around the track really fun.

Me and my three-year-old boy have sat together a few times now and made many different tracks with this, we actually have the same track pieces from a different brand, which we have been able to add on to this one to create even bigger tracks.

My little lad has so much fun playing with this. We often make tracks together then watch and cheer as the police car chases the criminal balls around the track. Usually, track toys often get boring and stale after a bit of use, but this is different as there are just so many different ways you can set up the track and you can also clip other similar track sets to it. If you had enough track you could set this up to run around an entire home.

Another thing we have done which requires another set is set up racing with the car in this set and the cars from the other set. So there are a few tracks next to each other of the same length. It may seem boring, but it’s just a showcase of what you can do with things like this.

This is a really fun toy, that my three-year-old really enjoys playing with. There’s so many different styles of track you can set up, which makes the possibilities almost endless, especially when you combine that with the fact you add loads of these tracks together. 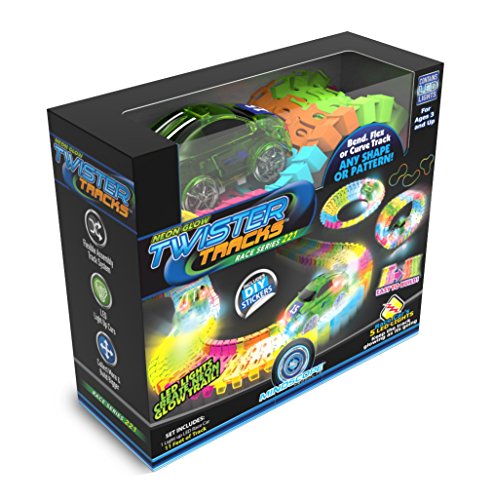