Welcome to my Beby Kid’s Tumble Train review. My little boy is mad about trains and anything else on wheels for that matter. He has a few wooden train tracks that he loves, but this is very different in comparison.

The difference between this train toy and my son’s others is that this one consists of a plastic track that can be laid out as you like, in a formation that enables it to sit upright in a curved shape, which in turn makes the train tumble the track back and forth.

The train itself is made from a strong plastic and has six moving wheels set out as three on each side. These wheels don’t move the train, though, they are simply for the purpose of giving the train a real look. Instead, the train sits on the track using a clip and a set of guide wheels hidden behind the real wheels. A cog underneath the train then lines up with the teeth running through the middle of the track. This cog is of course, what makes the train move. The train also has working lights and a music system. The train is powered by four AA batteries, these aren’t included.

Assembling the track isn’t too hard, although it can be time-consuming and a little bit awkward. Getting the track pieces together is at times a real pain as they often refuse to instantly clip together as you bend the track to fit other pieces the bits that are clipped often unclip, leading to more assembly chaos. Once finally set up the track is thankfully very sturdy.

The build quality is great. Despite the horrible to put together track, everything is well made. The track pieces are strong and the train is very well put together.

My little boy absolutely loves this train, not just because the train moves, but because the track also moves along with the train. The train also moves as it likes, so one minute it may move forwards then it will move backward, which also changes the direction that the train goes in, which gives it an unpredictable play style. My son has literally sat playing with this toy for hours and doesn’t seem to easily grow bored of it. He loves the fact we can set the track up as many ways as we like.

This is a really fun train set that has an amazing unpredictable play style. The track can be set up as many as you like, although it is a pain to connect the pieces together. 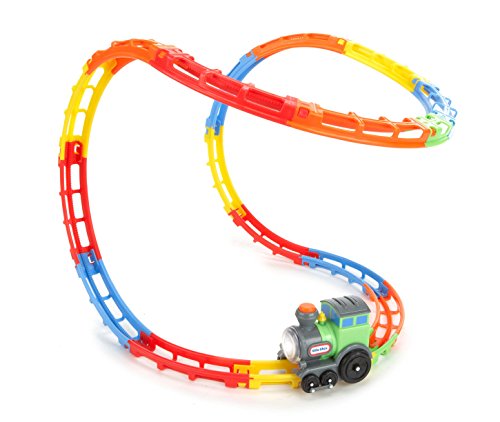