Welcome to my Beby 3 in 1 Double Sided Easel review. Being the parent of a toddler in nursery, I know all oo well just how important it is for him to develop skills where it comes to letters, numbers and drawing.

The design of this is best described as ‘child-friendly’. I say this because it has a cute bear design, that consists of the main legs holding the easel up with a round shaped head with little ears on the top.

It stands just like a real easel, with three legs that consist of two at the front and one centralised leg at the back. For extra support, the storage tray sits connected to each leg. Unfortunately, the way this is done means the easel can’t be folded at all, so storage isn’t as easy as it could be.

The easel board is double-sided with one side for chalk and one side for board pens. Each side is magnetic so the magnetic letters, numbers and symbols can be used no matter what side of the board is being written on.

There are 52 different magnetic letters, symbols and numbers included in the set, but you can also use any other magnetic pieces you have. Also included are a few chalks, a blackboard pen with a small eraser lid and a larger eraser perfect for both the chalkboard and white board. To be honest, the whiteboard pen was useless, it only lasted a few minutes before it gave up working completely, luckily I already had a thicker whiteboard pen laying about.

In terms fo quality, I feel some areas could be better, for example, the plastic used for the legs feels a bit flimsy, particularly in the areas where the leg sections attach to create a full leg. Also the board in my set needed to be tightened as it was pulling up at the edges. All of this aside the easel is sturdy once fully assembled.

Assembling the board isn’t that hard of a job but you do need to pay close attention to the letter/number combination on each leg part to ensure everything is as it should be. Also, there’s no instruction booklet included, instead the assembly instructions are part of a small area on the box. They do give you a slight idea how to do it, but to be honest, I got the job done without using them.

Once assembled the kit can be taken down again, but there’s no option to fold it down for easier space-saving storage, which means unless you are willing to take it down and put it in its box at the end of each use, it will pretty much be in the way.

This is quite a fun little kit that my son has really enjoyed using for drawing and even learning basics like numbers and letters. It doesn’t hold his attention as much as other toys he has, but we can sit playing with it for at least half an hour at times.

Since he’s now at nursery, this toy is actually a brilliant educational tool as well as something the can be used for fun purposes. This is because the letters, numbers and mathematical symbols can all be sued in a fun but educational way. For example, me and my son have sat a few times and done number counting by drawing the numbers on the board and even finding them in magnet sets. We have done the same with the letters and even created words such as mom, dad, dog etc, although since the letter set only comes with one of each letter we did have to use the fridge magnet letters we have.

Once we are done with the set my little boy will clean it using the cleaning sponge included and we simply place all the bits in the tray and put the easel away until next time. As I mentioned earlier it doesn’t fold down so it does take up space when not in use.

With a few issues here and there, this isn’t anywhere near perfect, but it’s still really good and is something I would recommend. It’s easy to assemble and has been fun for my son each time he uses it. I also really like how its a great educational tool as well. 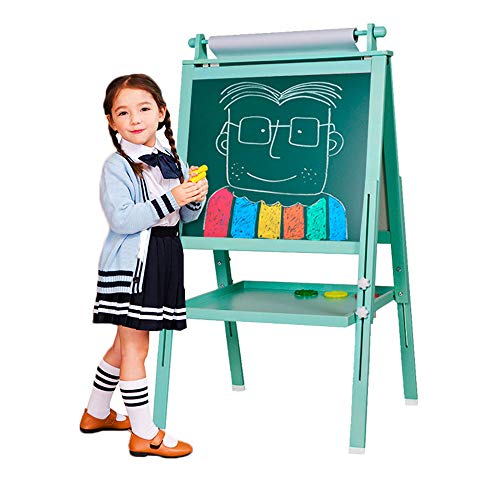