Listed below are bestselling ANMKOT Bluetooth Android which satisfy both affordability and quality.

At first sight, I wasn’t too impressed with this controllers design. It’s not bad, it’s not ugly, it just didn’t look like it would be very comfortable at first, but as the saying goes ‘don’t judge a book by its cover’. Yes, it may be made of plastic, but it’s surprisingly nice to hold and feels almost as good as my PS4 controller, it’s smaller than a PS4 controller but has just as many buttons. In terms of button layout, though, I would say it’s been designed to look more like an Xbox One controller. it’s not 100% a clone but things like the analogues sticks are laid out the same, with the one on the left-hand side being at the top end of the controller and the one on the right-hand side being at the bottom end of the controller. The D-Pad is also located in the bottom part of the left-hand side. The analogue nubs are a bit annoying as they are solid plastic without a rubber feel to them, which makes them slightly uncomfortable and also very hard to grip properly.

Since this controller can be used with smartphones as well things like Android T.V boxes, it only makes sense for it to have a clip that can hold a mobile phone so you can basically clip the phone into the controller and only have to hold the controller while the phone sits above it, it’s almost like turning the phone into a handheld portable games console. There’s plenty of room for phone upgrades as well as the clip can hold any size phone from 3.2inchs to 7 inches, so you can even use it with a 7-inch tablet if you want to. The arm does a great job of gripping both of my phones (A Htc One M9 and a Moto G 2015).

There is, however, one little annoying issue and it’s in regards to the button location of the phones. Each of these phones has their volume and power rocker buttons down the right-hand side positioned almost in the middle of the frame. This means it’s impossible to have either of my phones central within the clip without either the volume buttons being pressed or the power button being pressed. This means each of the phones has to  be way out of line with most of their frame sticking out of one side of the clip.

The controller has a built-in 400mAh Li-Ion battery, which promises up to 40 hours of continuous gaming time. So far I have probably clocked in 15 hours with this controller and the phone and it’s still going quite strong from its first charge.

Setting this up with my phones via Bluetooth was a very easy task which took me no longer than 30 seconds per phone. If you haven’t done it before, the manual explains how to do it quite clearly.

Now not all Android games work with controllers and not all that do work come already configured. Now I’m staying off these games as configuring controllers for games that don’t support them is a time-consuming activity. However, the game I have been playing recently with this is GTA: San Andreas. I knew this game worked with a controller as I have played it through my Android T.V box with another controller. If you want to find games that work with Android controllers with no added work needed simply search the Play Store for this term ‘Gamepad games‘.

Anyway back on to GTA: San Andreas. The controller works a charm with this game. It’s responsive and there’s no lag at all from the wireless connection, which means everything is done as the button is pressed. This means no delays and annoying issues such as missing a command. The sticks work really well and as this game is a driving sandbox game they really do make a difference compared to the usual on-screen versions.

This is a fantastic controller for anyone who really loves to game on their phone but hates the on-screen controls that come as standard. It works well, has great connectivity and feels very well made. 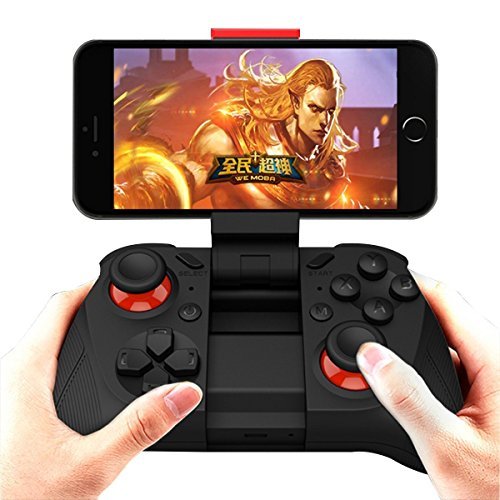