Welcome to my review of the AGPtEK G05 8GB Portable Clip on Mp3 Player. While mobile phones have pretty much taken over as the MP3 players of our time, there may still be times where a traditional MP3 player is better to have. Such times include a young child who doesn’t have a mobile phone or an elderly person who just wants something simple to use.

Listed below are bestselling AGPtEK Portable Clip which satisfy both affordability and quality.

The first thing I noticed about this and you most likely will to is just how small it is. It’s half the size of a debit card yet it still manages to pack in a 1.5inch color display and control buttons. Around the back is a clip that can be used to clip it to an item of clothing, which makes it a great MP3 player for people who do a lot of running and gym exercising. The only real issue with the clip is that there’s no guarantee it will safely stay clipped onto your item of clothing, which means it could fall off and hit the ground quite easily and since it’s only made of plastic, it won’t take a full force fall to the ground very well.

As I mentioned above the MP3 player shell is made of plastic and while it feels as solid as I expected, I do feel it won’t take a full force fall very well. That said it does feel very well made and even looks it.

There is a handy silicone cover with it, that does add a level of protection to the MP3 player, but again I still don’t think this will be enough to protect it from a full force fall. The cover provides access to the buttons and headphone jack, but for some reason, it doesn’t provide access to the charging port, which means any time you want to charge it or transfer files to or from it, you have to remove the case.

As expected earphones do come included, but also as expected they are pretty terrible and their sole purpose to provide some earphones in case you don’t them, I however, have hundreds of better earphones, so after using these once just to test them I have left them in the box where quite frankly they belong forever.

Unlike some of the other MP3 players with screens I have used, this one doesn’t support video playback, which may be an issue for some people. I personally can’t stand trying to watch a movie on a screen any smaller than 5 inches so this isn’t an issue for me. Talking of the display, it is rather clear for what it is and writing is quite easy to read. Album art is a bit blurry, though, particularly for the three default songs already installed on the MP3 player.

Navigating through the user interface of this MP3 player is quite easy and everything seems to have been designed with simplicity in mind. For example, the main menu consists of a vertical row of different options to choose from such as the music player or FM radio.

The MP3 player comes with 8GB of built-in memory, but you can expand on that with a MicroSD card up to 64GB in size if you wish. I haven’t had the need to do this as I only store about 4GB of music at a time on any of my devices.

The built-in 300mAh battery has only been charged once since I received the MP3 player and between then and now I’d say I have used it for a total of 12 hours and it still has half the battery left, so I am going to believe the claim of about 24 hours per charge.

The audio is great when used with decent earphones and not the rubbish ones that come included in the kit. The audio is clear through my branded earphones and is just as good as the audio my phone can produce.

This is a brilliant little MP3 player that perfect for anybody who may not have a phone or somebody who doesn’t want to use a phone as an MP3 player. It’s well made, easy to use and has enough memory already for a few albums of music, but if you wish you can expand it with a memory card. 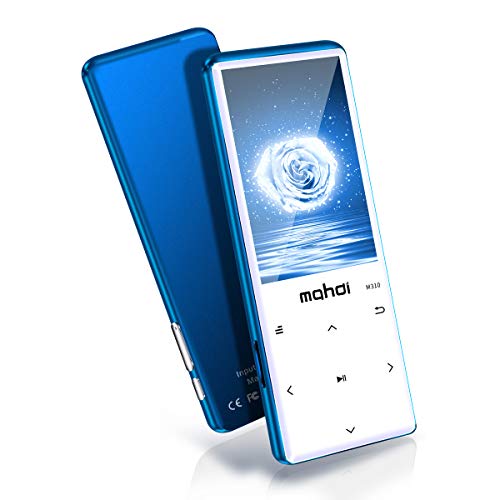